This morning, activists have climbed a coal power station chimney in Oxfordshire and blocked a coal mine in  Derbyshire in protests over climate change.

A group bicycled around and forced their way into Didcot Power Station, run by N-Power, a subsidiary of German utility group RWE, at about 5:30am today.  Nine climbed the steps of one of the chimneys; they have supplies to stay there for a long time, during which the power plant will be unable to operate. A further 13 were are on the coal conveyor belt.

In Shipley, members of Earth First! entered UK Coal’s opencast coal mine near Shipley at 9.30am, occupying six vehicles there. They say they intend to stay as long as possible in a bid to stop new coal mines and power stations in the UK.

All this comes after more 1,000 people demonstrated at Ratcliffe-on-Soar’s power station for the Great Climate Swoop last weekend. 56 activists were arrested.

Liz Cartmel, a protester at Shipley says: “We recognise the important role coal mining has played in the local economy in the past, but at a time where our future survival hangs in the balance we need to work towards a future without climate destroying coal. Our only way out of the climate crisis is to reduce consumption and to use renewable energies such as wind and solar.” 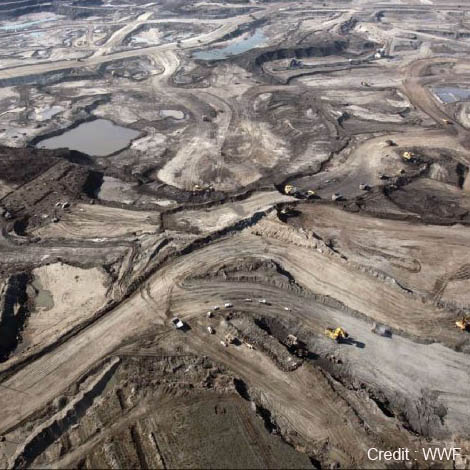 As further proof that the Obama administration is serious about tackling climate change kissing up to big oil, the Dept of Interior announced today that it would go ahead with a second round of federal oil shale leases. While most news outlets focused on the DoI scrutinizing royalties for shale oil, the real news is that the Obama administration is opening up our public lands to destructive oil extraction. “With this new round of [research, development, and demonstration] leases, we hope to move closer to responsibly and sustainably developing our oil shale resources,” said Interior Secretary Ken Salazar.

Of course there is nothing responsible or sustainable about oil shale. The process of extracting oil shale is similar to tar sands. The land is  strip mined, then the oil is baked out of the rock by heating it to high temperatures. This is a process that destroys the land, uses massive amounts of water (most US oil shale is in arid climates), and uses massive amounts of energy. If tar sands are any indicator, it may take as much as 1 barrel of oil to extract two barrels of oil, greatly boosting the carbon footprint of shale oil. Continue reading

Rising Tide North America, Carbon Trade Watch, and the Camp for Climate Action would like you to join us on the October 24th day of global climate action to spread the word about the biggest financial scam in history – Carbon Trading.

In order to stabilize the climate before billions of people around the world suffer the consequences, it is imperative that carbon-trading schemes are stopped and real, democratically determined solutions are implemented.

We cannot afford to waste any more valuable time and resources relying on such market-driven strategies to deliver science-based goals (such as 350 ppm of CO2) when so many lives and livelihoods are at stake. If we truly wish to protect people and planet, then we must put climate justice before corporate profits.

However, first and foremost, we need to dispel the misguided notion that carbon trading has anything at all to do with climate change mitigation, or the present and future wellbeing of our communities.

We are proud to announce the launch of www.350reasons.org – a website presenting 350 reasons why carbon trading will not serve to stabilize the climate. You can submit your own reasons for opposing carbon trading via a web-form on this site. We will release the full 350 reasons next week.

People in Copenhagen aren’t waiting around for world leaders to take action on climate change, on September 26 about 1,500 people took direct action to shut down one of Copenhagen’s coal fire power plants. The SHUT IT DOWN action plan had been openly announced several months earlier and Danish police had been gearing up for massive use of force to trial new anti-protest laws. Around 100 protesters managed to get inside the power plant.  Although at that point the plant should have been shut down due to safety regulations,  it was kept running.

Around 100 people have been arrested. One person so far has been charged. The action was widely and positively covered in Danish news. The  protesters regard this act of mass civil disobience for climate justice an encouraging success  and a positive trial run for the actions surrounding the COP 15 climate conference in December in Copenhagen (On Dec 16, RECLAIM POWER!).