1/13/2009 – New York, NY – In the wake of a controversial outcome at the Copenhagen climate talks, a diverse crowd of scientists, Faith congregations, activists, students, and concerned citizens converged in confrontation and protest at the 2nd Annual IGlobalForum Carbon Trading Summit today. The summit is the largest annual meeting place of corporations, banks, and lobby groups to further the agenda of a carbon trading scheme to address climate change. Activists rallied to oppose market-based trading of greenhouse gas emissions credits and call for real solutions to the climate crisis. Dr. Maggie Zhou, from Secure Green Future and Climate SOS, was among the demonstrators who engaged in a nonviolent direct action and risked arrest in an attempt to blockade the venue’s revolving doors, and display a banner decrying carbon trading as a false solution.

Other outraged environmentalists and faith-community activists entered the hotel and disrupted the Carbon Summit luncheon, challenging attendees to consider the future of the planet above their own short-term financial interests and denouncing them as climate profiteers. The private gathering, separated from the central hotel atrium by a tall curtain, was suddenly exposed to activists and other members of the general public when the curtain was torn down.

“The same Wall Street bankers who gave us the global climate crisis are trying to own the sky,” stated Brian Tokar, director of the Institute for Social Ecology and an organizer of this week’s protest events. “Carbon trading is unjust, it will not work, and it is a false solution. It is a dangerous distraction from the urgent measures needed to prevent an ever-worsening destabilization of the climate.”

Speakers at the rally included Reverend Billy of the Church of Life After Shopping, who delivered a critique with the fire and brimstone of a televangelist; Chaia Heller, Professor of Gender Studies at Mount Holyoke College, and Father Paul Mayer, co-founder of the Climate Crisis Coalition and religious community leader. 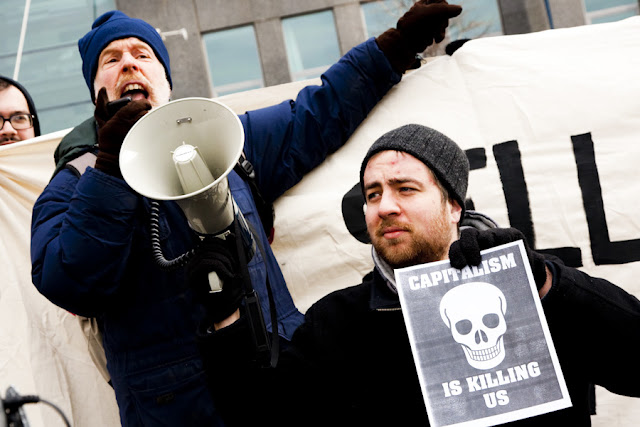 “I don’t trust these people to make decisions about the future of humanity,” said one young participant, who wished not to give her name because she will be risking arrest today. “If we follow through with market-based solutions like carbon trading, everyone will regret it. We need to stop believing the corporations’ false solutions and put all our collective energy into getting this conversation onto a track that’s useful.”

Dr. James Hansen, renowned climate scientist, was present outside the Carbon Trading Summit on Tuesday to voice his opposition to carbon trading schemes.

“Cap-and-trade is not a smart approach,” wrote Hansen his book Storms of My Grandchildren. Hansen has stated that current US climate legislation is “worse than nothing” because it relies on risky and ineffective cap-and-trade. He also declared that the failure to reach an agreement in Copenhagen was a better outcome than adopting the carbon-trade-based approach that was being negotiated.

“Carbon trade, which includes cap and trade and offsets, are a dangerous distraction, economically risky, and prone to gaming and speculation,” stated Maggie Zhou. “Offsets allow polluters to simply pay someone else somewhere else to reduce their emissions on your behalf, which in the end does nothing to actually reduce emissions. The climate crisis simply can’t wait!

“Carbon trade is an insidious threat to human rights,” stated Dr. Rachel Smolker from Biofuelwatch and Climate SOS. “It turns rights to pollute the atmosphere, as well as forests, soils and agriculture practices that store carbon into commodities to be bought and sold as excuses for polluters. This is the greatest corporate grab on the “global commons” ever! It is disastrous for most of humanity.

Climate SOS, Rising Tide North America, Beyond Talk (Climate Pledge of Resistance), Rainforest Action Network, Institute for Social Ecology, The Change You Want to See Gallery and others are behind this effort. To learn more and take a stand for climate justice, for real solutions, and for the future of our planet, please visit above websites, or visit us on Facebook. contact@climatesos.org