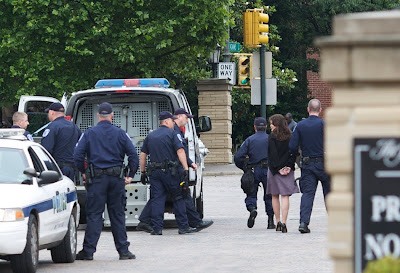 Tuesday, May 18 Activists disrupted the annual general meeting of criminal corporation Massey Energy this morning in Richmond, VA. Two of the group were arrested as they demanded an end to Massey’s reckless disregard for human life, community health, and the environment.

As shareholders entered their meeting in the main ballroom of the sheik Jefferson Hotel, activists occupied the adjacent rotunda, chanting loudly and draping a massive banner over the ornate mezzanine railings. The 10’ x 10’ hand-painted banner read, “Massey – Stop Putting Profits Over People!”

“Coal mining is dangerous. It’s dangerous for workers, dangerous for surrounding communities, and dangerous for the future of our planet. It’s time we move off of our dependency on coal and transition to a just, safe, clean energy future.” said Kate Rooth of DC Rising Tide, one of those who disrupted the meeting. “Massey Energy is notorious not only for putting their bottom dollar over people’s safety, but for driving people out their communities and poisoning their drinking water.”

Protesters loudly read an open letter to Massey (below) demanding they cease mountaintop removal coal mining, a practice that is destroying central Appalachian communities. A similar open letter was tendered by two activists who yesterday were assigned an outrageous $100,000 bail after non-violently blocking the driveway to Massey’s regional HQ in Boone County, WV.

As activists disrupted events inside, several hundred unionists and environmentalists rallied in the rain outside – albeit separately – to demand accountability for Massey’s despicable record of dangerous mine conditions, and its devastating social and ecological impact. Rally-goers pointed to the recent explosion at the Upper Big Branch mine in Montcoal, WV that killed 29 miners, and its mountaintop removal operations throughout Appalachia in their indictment of Massey’s corporate greed.